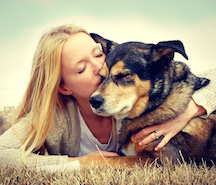 A research conducted by researchers at Pennsylvania State University showed that presence of a dog during a psychosocial stress task reduces stress levels and heart rate.

In fact, this study carried out with 48 participants, wanted to investigate whether a dog could act as social support, like a human friend, during a stress task. In order to do so, participants were randomly assigned to one of the following three conditions: close friend, dog or control. In a laboratory setting, all participants where exposed to a psychosocial stressor either in the presence of a close friend, in the presence of Jazz (a 7-year-old golden retriever) or alone.

Results suggest that the participants in the dog condition had overall lower cortisol levels, an important stress hormone, in comparison to those who were exposed to the task alone (control group) and those who were in the presence of a close friend. Furthermore, participants in the dog condition had a lower heart rate than the control and friend group during the psychosocial stressor. Hence, during a psychosocial stressor, the novel dog acts as the best form of social support, attenuating the stress response.

This study is one of the first to show the impact of dog on cortisol levels and heart rate. However, it adds up to the long list of positive impacts that a dog has on human health.