Take a look at our official magazine

Stay informed about all things CSHS!

Take a look at our news feed

“I am so sorry I forgot, I am so stressed I can’t remember anything.”

Sound familiar? Not surprisingly, given that stress is rated as a common cause of memory problems. Would it surprise you to know that we need stress hormones to have good memory function?

Scientific studies performed at the Centre for Studies on Human Stress have shown that when stress hormone levels are outside normal limits, our ability to learn and retain information can sometimes be disrupted.

What happens when stress hormone levels are too high?

What happens when stress hormone levels are too low?

In a second study, we gave participants a medication that temporarily lowered their stress hormone levels and tested their memory. Their memory ability was again impaired!

Can we restore memory that is impaired by stress hormones?

We then gave the same participants a medication that brought their stress hormone levels back to normal. This restored their memory performance to their normal everyday memory functioning!

Altogether, these results showed us that stress hormones are essential for normal memory function. They also showed us that too few or too many circulating stress hormones can impair memory performance. This led us to conclude that there is an inverted-U shape function that relates memory and stress in humans.

The relation between stress and memory

Interestingly, the very brain areas that are responsible for our learning and memory functions have the greatest number of stress hormone receptors. We always have to keep in mind what our stress response system was initially designed for: to help to ensure our survival.

The stress response system does this in several ways (i.e. making sure we have enough energy to fight or flee in the face of a threatening situation), but it also helps up to remember relevant details about these situations so that we can avoid them in the future or be better equipped to deal with them a second time.

For instance, if we had taken a different route back from the mammoth hunt and ended up in saber tooth tiger territory (and managed to escape), we would need to remember the location of this territory and the methods we used to get away. We managed to do this through the action of stress hormones in brain areas critical for learning and memory. Beautifully said! 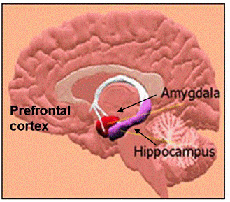 In humans, three of the most important learning and memory regions are the hippocampus, the amygdala, and the prefrontal cortex. Each of these brain areas is highly specialized for specific types of memory processing.

The hippocampus for instance is involved in spatial memory (i.e. where the saber tooth tiger attack took place), the amygdala is involved in emotional memory (i.e. the fear we felt at the time of the attack that resulted in the release of stress hormones), and the prefrontal cortex helps us to evaluate the situation in order to make decisions about how to act (i.e. pay attentionto only the relevant details -tiger- and decide where to throw our spear).

These brain areas are all interconnected and talk to each other through several relay systems.