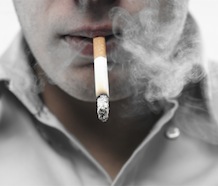 According to research conducted at the Universities of Birmingham, Oxford, and Kings College London, the impact of quitting smoking was found to be associated with a significant improvement in mental health, equal to or larger than the effect from a course of antidepressants.

Researchers looked at the outcomes of 26 research studies that assessed the mental health of adults prior to stopping smoking and at least 6 weeks after, in the general population and in patients with long-term physical and psychiatric conditions.  Subjects’ anxiety, depression, stress and overall well-being were considered. The average age of participants was 44 years old and the average number of cigarettes smoked was approximately 20 a day. All the subjects were followed up on for an average of 6 months.

The team found consistent evidence that quitting smoking leads to an improvement in mental health with reduced depression, anxiety, stress and improved positive mood and quality of life compared with continuing to smoke. The reduction in mental health problems was equally evident for both the general population and patients who had already been diagnosed with a mental health disorder. This research could provide important implications for healthcare professionals since patients with mental illness smoke at considerably higher rates than the general population. Efforts to help them quit smoking would not only lengthen the average life span but also improve mental health and quality of life.