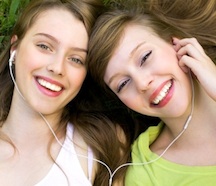 Music’s surprising effect on your stress

A number of studies have found that listening to music during or after a stressful event or day reduces the stress response. However, is it also the case if one is listening to relaxing music before being exposed to a stressor? Recently, researchers at the University of Zürich tried to answer this question, and they were surprised by the answer!

Sixty healthy female volunteers were assigned to three different conditions. The only distinction among the groups was what the volunteers were listening to, before being exposed to a psychosocial stressor. In the first group, volunteers listened to relaxing music. In the second group, researchers asked the volunteers to listen to the sound of rippling water. In the last group, there was no acoustic stimulation. In contrast with the researchers’ hypothesis, results show that volunteers from the first group (with relaxing music) had the most marked reaction to the stress task.

One hypothesis that could explain this result is as follows: listening to music as well as the stress system activate similar areas in the brain. Therefore, listening to music before a stressful task prepares these brain areas, which then react further when faced with a stressor.

We can not tell if similar results would have been observed in male participants, as they were not included in this study. Researchers suggest further research on this question, as results could have implications for patients undergoing stressful medical procedures, such as surgery. Researchers also want to explore a secondary result which may indicate a faster recovery of the autonomous nervous system in volunteers of the first group.