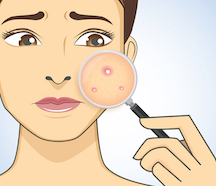 I’m stressed out, I have pimples!

A study conducted by researchers at the School of Medicine of Wake Forest in North Carolina suggests that a person’s perceived level of stress is linked to the severity of their acne.

In this study, 94 students were recruited. These students were asked to fill out a questionnaire assessing the level of stress they were experiencing. The questionnaire was completed on two separate occasions; a stressful examination period and during a non-stressful vacation period. The level of sebum, a substance naturally produced by the skin that may cause acne, was measured. During both periods, an observer, who was not aware of the characteristics of the study, classified the type of acne these students had as well as its severity.

The results provide evidence of the link between the student’s perceived level of stress level and the severity of their acne. Precisely, the more stressed a student felt, the greater their severity of papulopustular acne, a type of inflammatory acne. The students reported, on average, higher stress levels during examination period; this was correlated with more severe acne. However, the levels of measured sebum were not linked to the individual’s levels of perceived stress. This suggests that an increase in perceived stress levels is linked to an increase in acne, but that this increase occurs due to a mechanism other than the secretion of sebum.