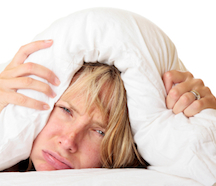 An interesting link between cortisol levels at bedtime and anxiety

Cognitive theories of anxiety suggest that anxious individuals tend to interpret neutral stimuli in their environment as threatening, more easily than “normal” individuals. In fact, they have an attentional bias towards threat. Even though there are many data to support this hypothesis, the physiological basis for this bias is still unclear. A team of researchers from the Kitasato University, in Japan, led a study to explore if attentional bias is linked with cortisol levels, depressive symptoms, and anxious personality traits. Eighty-seven young healthy adults (of which 48 are women) took saliva samples three times a day (upon awakening, 30 minutes after, and at bedtime) for two days in a row. They also completed a psychological assessment of their anxious traits, depressive symptoms, and attentional bias. Results show that cortisol level at bedtime is the best predictor of attentional bias. This is interesting because it suggests that high levels of cortisol at night might influence the body’s sensitivity to negative stimuli afterward, which could result in an attentional bias.

It is important to underline the limits of this study. First, this study used a correlational design, which means that we cannot know if the attentional bias towards threat causes the elevated cortisol levels, or vice versa. Secondly, cortisol samples were collected at three daily time points, which limits the analysis of daily variation patterns. Despite these limitations, this study illustrates the potential physiological causes of anxiety.